On November 24th, 2020, Dr. White welcomed guest Jennifer Garrett for the thirteenth episode of Healing America with Dr. Jim White. Garrett is the host of the Move the Ball podcast, which is also the name of her book. She is an Army lawyer and Fortune 500 executive. She has seven degrees and is an expert on leadership. Highlights of Jim and Jennifer’s conversation below: 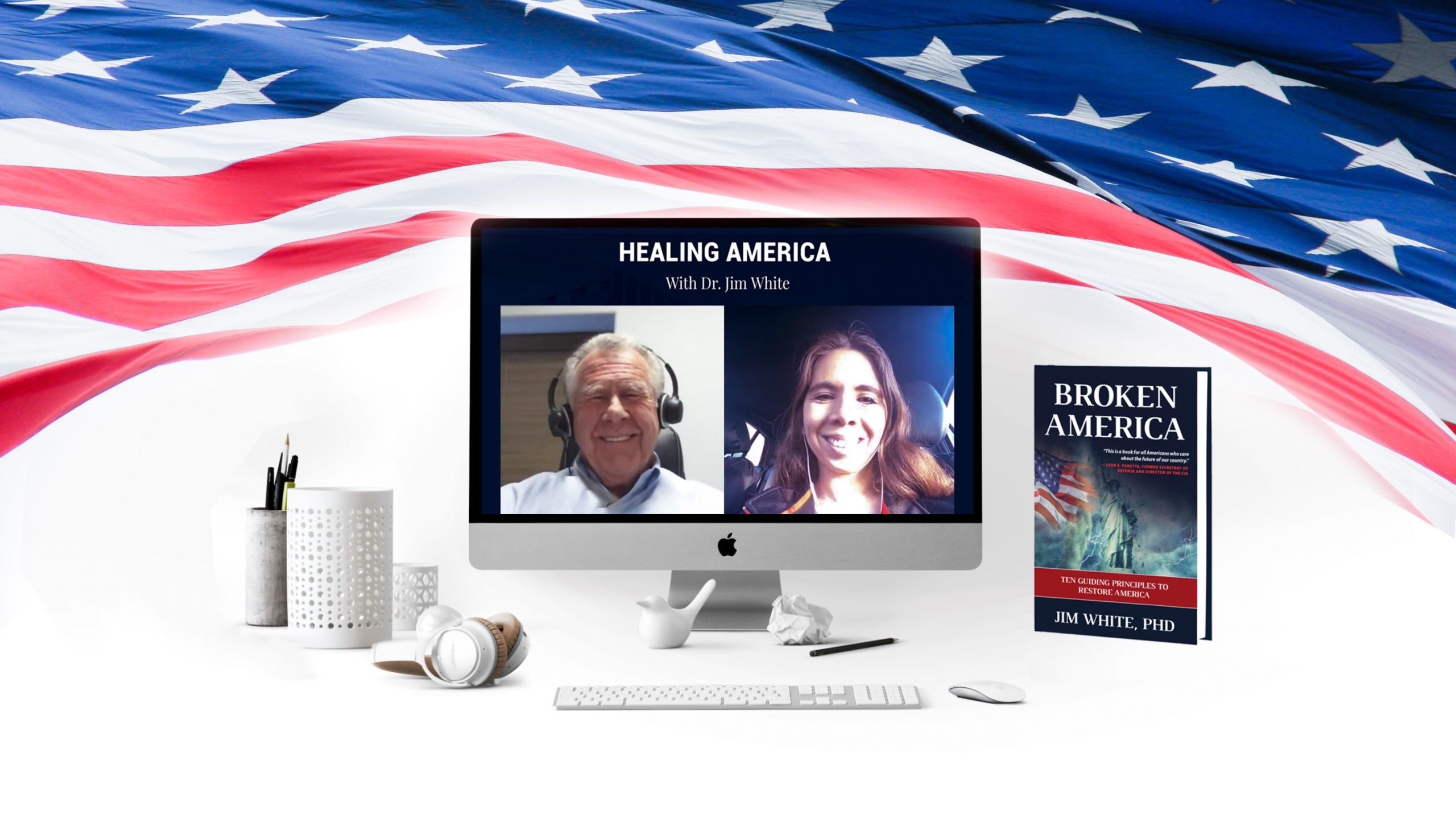 JW: How did your interest in leadership and football come about?

JG: Great question! I grew up in the city of Chicago, and I was a 70’s baby, but growing up in the 80’s I had the ‘85 Bears, which was a great time to be a Bears fan, back then. Maybe not so much in the moment, but back then it was great times and I really just fell in love with the game. I had two parents who were die-hard football fans. I’m an only child, no brothers who played football or anything like that, but my parents and I would sit every Sunday at the TV and watch the Bears game. And what really intrigued me – football is a fast-paced game. So, there’s excitement because of the dynamics of the sport, but what really intrigued me about the game was there was these instances when you’d have the Bears down by a few touchdowns and they’d come back to pull off the win. That didn’t always happen, but it happened from time to time and it was neat to see. And it’s not unique to the Bears by any means, but that’s what I saw as a kid and so I really got interested in the game at a young age. I’ve followed it all through my life and really studied it in depth. Not just from the plays, but also the lessons you can take, from all sports, not just football, but football was the sport I was following. And how they apply off the field for us to be successful in our careers, in business, and in life in general.

JW: Your love of sports led you to write your book, “Move the Ball,” tell us about that.

JG: Move the Ball is a book as you mentioned, that talks about football, and it draws parallels to football and life and how you can take the competitive athlete mentality and apply it beyond football to be successful. What sparked me to write the book is I’ve always had a passion for writing, first and foremost. And so I told myself many, many years ago that I was going to write a book, and I had different thoughts on topics. And back in 2011, I was at a Chicago Bears/Greenbay Packers game, it was the playoffs, it was 17 degrees out- I write about this in the book. And so there we are at Soldier Field freezing our butts off and my team is yet again losing. Not surprising when you play the Packers. And so the Bears are trying to make a 4th quarter comeback. They have the ball, they’re driving down the field, it’s now 4th down and the coach takes a time out. And it was in that moment, where I started thinking about our lives -we also have 4th down moments and we have to figure out what plays we’re going to run. Are we going to go for it?

JW: You’re also an Army lawyer. In the National Guard, with your degrees. That’s a big deal. How did you go down that path?

JG: I always had an interest in serving. I was young and I also wanted to be an aviator. I grew up wanting to be an Airforce pilot, and I was going down that path. I had a number of people tell me to watch out for those recruiters. They’ll tell you whatever they want you to hear, so just be careful. That spooked me enough to pause and be like maybe not. As I continued on in my educational and work careers, I still wanted to serve. I’ve always had that desire. After law school, I decided to get in touch with a Judge Advocate Recruiter to talk about serving in the Army.

JW: You have seven degrees, what are they?

JW: You’ve got the book, you’ve got your podcast, how are you faring during these Covid-19 Zoom days?

JG: Zoom technology has been great for us to stay connected to people when you can’t physically see one another. And I know some people get Zoom’d out, but I’m used to being on Zoom calls all day so it doesn’t bother me. I’m doing a lot of virtual speaking. You’re not going to see me on stage in front of 5,000 people for another 3-6 months depending on how things go with the vaccine and the pandemic. Zoom has allowed me to share my message while going through the pandemic. Our podcast will kick back up the day after the Superbowl, and I’m excited to have some new episodes and new content out there. I’m also working with a lot of businesses on how do you tackle challenges related to Covid right now as a remote workforce. Some companies are doing well because they’re used to having that infrastructure in place, but others – it’s new for them. How do you stay connected and lead your teams effectively? How do you make sure you’re being most productive in this remote environment?

JW: Is it your plan to make a career out of the Army?

JG: That is my plan to make a career out of it. So, we’ll ultimately see what happens at the end of the day, but that is my current plan, yes, to do at least 20 years of service.

JW: In the National Guard, what are you involved in?

JG: So, with Covid, I was actually activated for a little over three months to help with the Covid. Back in March when the world was in chaos and trying to figure out what all this meant and seeing ICU’s at capacity. A lot of National Guard units were getting activated to go help that support and so my unit was also activated. I live in Chicagoland, but I’m in the Michigan National Guard, so I got called up and they were like “Hey, we need you.” And so I packed up my stuff and drove in my car to Michigan thinking I’d be gone for a few weeks and I was gone for over three months.

JG: There is something that I would love to share right now. We’re doing through the month of November – I’ve got a women’s group on Facebook called She’s Got Game, and the focus of that group was to bring together women to connect them, to support each other to learn and to grow. And so we have about 1200 amazing women in the group, and what we wanted to do this year especially to try to make a positive impact was to do a donation drive where we’re raising money in eight cities across the US to help women and children who are victims of domestic violence. And the reason for that is we know that because of Covid and this lockdown – there’s more cases unfortunately. And so it seemed like there’s a lot of focus on organizations helping food banks and homeless shelters, but it didn’t seem like there was as much attention on shelters serving domestic violence victims. We put together eight GoFundMe pages across the eight cities to try to bring forth some hope and positivity.

To learn more about and donate to She’s Got Game Holiday Drive to fight against domestic violence, visit powerandimpact.com.

Buy your copy of Move the Ball here. Catch Jim and Jennifer’s entire interview at authorjimwhite.com/webinars and don’t forget to order your copy of Broken America.