The tenth episode of Healing America with Dr. Jim White aired on the most anticipated evening of 2020- Election Day. While Jim tried to distract himself from the news, he asserted that many Americans would agree that this year’s election is one of American history’s most critical elections. In a two-part live webisode, White talked about America’s future, and later on, brought on Baxter Swilley, celebrated campaign manager and candidate for Lt. Governor of Illinois. 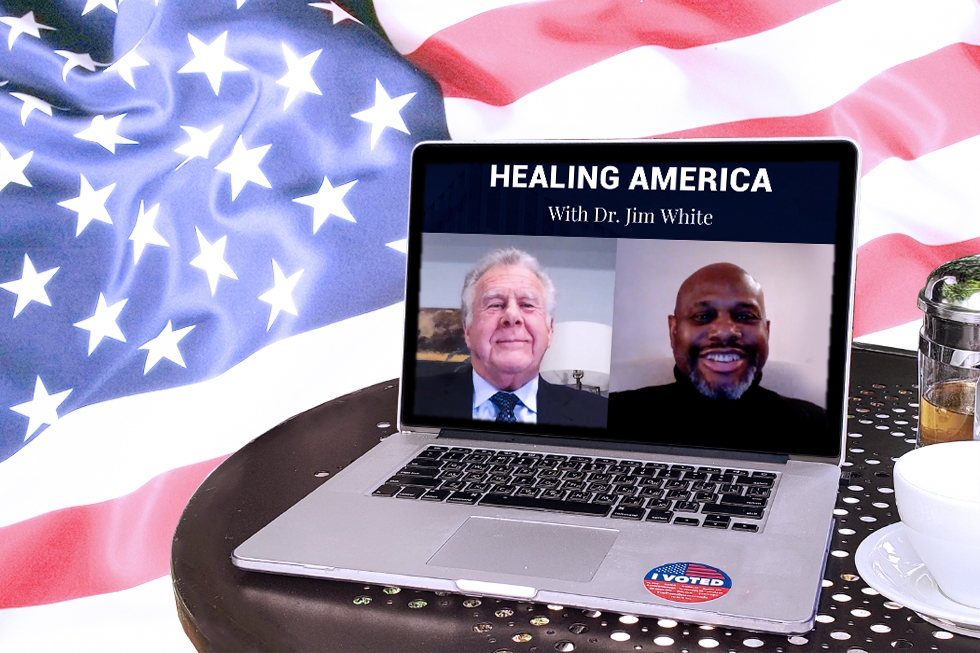 Americans love the colors red, white, and blue; they’re a well-known representation of a country whose politics are discussed worldwide. But if you break the colors apart, what do you have? A fractured country, divided by red and blue. The concept of political parties representing groups of people who share specific political ideas dates back to 1787 and the infamous battle between the Federalists and the anti-Federalists, led by Alexander Hamilton and Thomas Jefferson, respectively.

White, red, black, and blue. Today’s color-coded state divides as we know them began in 1976. NBC news anchor John Chancellor announced that states won by Democrat Jimmy Carter would be represented on the map in blue, while those won by Republican incumbent Gerald Ford would be red. Ever since, its red team vs. blue team. As Americans, we are cornered into being loyal to our team no matter what. The other team is the enemy and must be defeated. Our friends, family, neighbors, and co-workers are likely not on the same team, but a democrat voting red and vice versa is considered traitorous. Even wearing something as simple as a hat could have an incredibly divisive reaction.

On September 11, 2001, the worst tragedy imaginable happened. After 9/11, Americans sought to return to normalcy, exceedingly, as so many mourned the vicious attacks. Shea Stadium, home of the New York Mets, became a hub for first responders and volunteers working together in the aftermath of 9/11, and MLB postponed their schedule for a week out of respect for the victims and their families. They resumed the schedule on September 21 and filled Shea Stadium with victims and first responders’ families. The opening ceremonies left the crowd feeling emotional and patriotic, but the game soon went into full-swing, reverting game-goers to the normalcy of baseball. When Mike Piazza came to bat, the future hall of fame scored a home run, stealing the Mets’ lead. Americans all over the country became joyous over Piazza’s game-winner. It gave Americans a chance to come together, regardless of their differences. And at that moment, the United States of America was truly united.

We need that chance to become reunited again. We are off course and adrift. Dr. White pleaded for the cease and desist our name-calling and blaming and to change this nation’s course. White’s recently released title, Broken America, is intended to do that. The book’s Ten Principles serve as a guide for democrats and republicans to come together once and for all. The stakes now are too high. White’s vision for the country includes leadership, truth-seeking, courage, integrity, equality, tolerance, respect, patriotism, capitalism, and compromise. To learn more about Jim’s ideas for the United States’ future and how Americans and politicians can apply the Ten Principles to their lives and work, order your copy of Broken America today.

“We need that chance to become reunited again. We are off course and adrift.”
— Jim White

In the second half of the episode, Dr. White welcomed special guest Baxter Swilley. Highlights of the interview below:

Baxter Swilley studied political science at Truman State University and did policy work at Tufts University. Jumping right into politics after college, Mr. Swilley has run campaigns all over the country. Today, along with running for Lieutenant Governor of Illinois, is involved in political writing and equity work.

JW: Here we are, November 3rd, Election Day. I think today we need to be patient, calm, and kind to each other. What are your thoughts?

BS: I agree. This is real-time for civil public discourse because, somehow, the truth prevails when you have a civil debate. And you somehow get down to the facts, and you get to the place where the rubber meets the road, and people can hear the information they need to make life decisions. It’s not just about who to vote for, but where to live, and how to raise your family – all of these things are really important. It requires the village- the public village to come together and share information with one another, which is so hard to do when our politics are so divisive.

JW: What year was the last campaign you ran? Every time I think about Barack Obama, I just get giddy – you have some experience with him, right?

BS: I do. Early in my career, one of the first and most memorable assignments I received was working for congresswoman Jan Schakowsky. I was her political director for two years, and Jan was a big fan of Barack back then. My whole ambition was for Jan Schakowsky to run for US Senate in 2002. It didn’t work out, she didn’t end up doing it, and she endorsed Barack Obama for the US Senate seat. And we got a chance to really know each other, him as a candidate, and me as a staff person for Jan. He’s a very intelligent man, but what I found is he’s really committed to the cause. He’s no joke; he’s the real deal. I miss him as much as you.

JW: January 21, 2021, that’s going to be a big date for someone. What would be your advice to whoever wins the election?

BS: That’s a really good question, of course, because guys like me are always advising candidates prior to the election. Every now and again, a candidate needs support in following his personal convictions to stay the course and to remember what it is that got him or her elected. So, I’ve been involved in those conversations post-campaign, and I think for either person if they respect the republic, if they respect the country, if they respect our democratic values, then they would channel the mood of the electorate that actually got them elected- and respect it, and internalize it, and represent it because I do believe that when America acts in the interest of its majority, it usually does the right thing.

BS: Well, I’ll always consult on campaigns. I do a lot of equity work here in Evanston. Evanston, as you know, is one of the first in the country to pass a reparations ordinance for descendants of slaves. We’re dealing with that here- I’m on the reparations sub-committee. So, I stay in the fight, Jim. I never leave the field; I’m always in the battle.

JW: You ran a campaign in Mississippi, didn’t you?

BS: I did, the first black mayor of Jackson, Mississippi. Those were really interesting times, Harvey Johnson – a really, really talented man who’s no longer down there, but he was the first- and I worked with Medgar Evers’s widow, his family, many people who worked for and marched with Dr. King, it was a transformative experience for me. I was 24, 25 when I ran that race; it was the first campaign I ever managed.

To catch the entire episode, visit authorjimwhite.com/webinars. To get in touch with Mr. Swilley, find him on Facebook, or email him directly at baxterswilley@gmail.com.